I’ll guess I have photographed the scribbles on 500 or so 1921-P Morgans. In doing so I have regularly been amazed at how well those subtle lines can hide from sight, especially on late die state coins that are determined to avoid being attributed.

But I’ve truly been stunned at the way tiny shifts in the direction and/or height of the light source, and/or the horizontal level of the coin, can make details suddenly appear… or vanish. No matter how well a given photo may turn out, fiddling with the light almost always reveals something that didn’t seem to be there before.

But this LDS D2 reverse coin takes it to a new level. It’s been a total PITA this weekend, especially since I found I have two more of whatever mystery VAM it is.

The 8 different bits and pieces of scribbles seen below, each one fairly distinctive in its own right, are the result of about a dozen different photos. The most that any one shot showed was 5, but not all were as clear as they are here. I thought perhaps focusing on one different fragment at a time and going through the scribbles guide over and over would do the trick. I just hoped it wouldn’t have to do it all 8 times.

Yes, I do have a bad case of OVID (Obsessive VAM Identification Disorder).

But I do feel better for having tried, even though I knew while I was doing it that a weekend was being wasted on coins that are very likely to stay in my “What Is This?” box until they are released back into the coin ocean.

It would be helpful to post at least one shot of the entire lower TF area, just to help place these detail photos in context.
Top

It would be helpful to post at least one shot of the entire lower TF area, just to help place these detail photos in context.


Here you go Tom, but it only shows half of the scribbles PUPs.

Thank you Dennis
That's why you are Mr. 44

So this D2 doesn't have any cracks on the obv or rev?
This one isn't easy is it.

Nope... no cracks anywhere, even though it (all 3 actually) are fairly LDS coins.
When in doubt... don't.
Top

Dennis,
I don't know what you have there. The closest that I can get to the strong lines next to the eagle's left foot is 3EQ, but I don't think that works.
Sorry

I'm not completely sure, but it seems like this might match what I just got listed as VAM 116. It's also LDS without cracks, and matches closely most of your scribbles. I can't really make out all the details such as "scribble C" you show, but scribbles E and F both match exactly. Why not check out the "polishing lines at ER" photo and see if that's any match:

I'll need to take some photos to be sure. In the meantime, here are some non-scribbles photos of the same coin in question:

Tom – What do you think?

I am now more sure that the coin is a VAM 116.
Yours seems like a slightly later die state than my discovery coin, but the fill in the G and the other photos all match.

I commissioned @messydesk to do some detail and full coin photos on my last submission to him, but apparently that has slipped through the cracks, as it were...
Top

I commissioned @messydesk to do some detail and full coin photos on my last submission to him, but apparently that has slipped through the cracks, as it were...

D'Oh! Thanks for the gentle reminder.

OK. So here are what I think are the main pick-ups on this one. 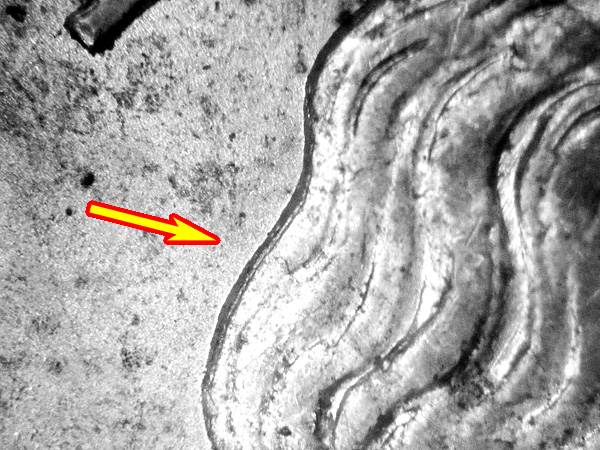 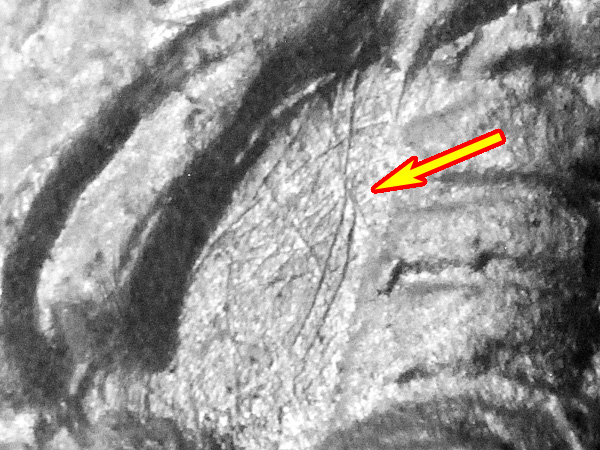 Thank you, JB! I should be sending it back to you soon for its full portrait.

Thank you Tom for the great news!

Here's another feature that's on all 3 of my coins:

That's another great photo, Dennis! I'm not sure how you got those lines in the yellow boxes to "pop" they way you did; maybe it's a depth-of-focus sort of thing, as they look a little more part of field of polishing lines when I look at the coin under a loupe. But yes, all of those polishing lines match - VAM 116.
Top
Post Reply
17 posts • Page 1 of 1