General discussion board about VAMs, but no buy/sell offers
Post Reply
53 posts

OK this is a first I sent in 4 coins for review and have 4 new discoveries. The 8 TF guys are going to be Pissed! Sorry! Kind of. Oh and the Denticle Clash Guys will not be happy,,, Oh and the CUD guys are just be Livid!

Ok lets start of with the easy one.

1878 S VAM 42b
OBV: Later die state than the VAM 42a with the die polishing that removed the N clash
Reverse: die further polished with beveled field near denticles edges. dozen small horizonal die scratches between and above DO in DOLLAR with two pair of .030 denticle spaced intervals. Denticle clashes occurred as lower reverse die was being installed after being polished. A few short die lines above E in UNITED and at right star just die polishing.

Congrats on your new DC's. Is there anyway you can post the letter from LVA? Your post is missing the Obverse, reverse type info and the I & R listing. This is info that is need for the new VAM pages.

I strongly question the legitimacy of that 78 VAM 82A listing. It kinda screams deliberate damage.
often the crusher of hopes and dreams
Top

I go totally NUTS for WOW! VAMs!! Or is that from WOW! VAMs?
Top

We've discussed this coin on this forum previously. Russ, if you're going to the ANA, please bring it with you.
often the crusher of hopes and dreams
Top

I'll setup the new pages for you.

Re:82A
I am curious to see the how far the obverse
star crack progressed before this Supposedly
new LDS specimen popped up. It does not make sense.
Top

I can't say that I disagree. 14.2 has long been known to come with and without the 14.2B die cracks. All of the full-coin pictures on the 14.2 page show them. I could have seen separating them into two, which would more formally acknowledge there is a scarce early die stage without them, but listing gentle feed finger scrapes is counterproductive and will especially frustrate the new collectors trying to attribute coins. Circulated coins will now have equivocal attributions because of this. I'm with JohnR on the 78 VAM 82A. I'll believe it when I see it, but it just doesn't seem right.
Welcome to the VAMWorld 2.0 discussion boards. R.I.P. old VAMWorld.
Top

Well lets start off by stating how I sent this group in.

1st The 1878 P VAM-82
I wrote in my letter to Leroy that John Roberts believes this coin to be some type on Post Mint Damage, but is not sure how it could of been done, as well as Dennis Carr. I sent it in in a flip so he could examine all 3 dies the OB, REV and Rim. The VAM 82's OB die was a one and done die use, and when I had it down at FUN, JR is the only person that I can remember saying it was Man Made. A few just could not wrap their head around the how, but most viewed this coin as a genuine retained CUD.

I wish to make ONE Thing Clear, I told this to Leroy flat out in my letter.

The 1878 P VAM 14.2 I thought that the EDS and the crescent die break on the OB and the displaced break on the REV should be a 14.2a and that it looks like the coin also has a few gouges thought the O of OF that extend in-between the ST of TRUST.

As far as the 1878 S VAM-42B I sent in 3 examples. The VAM-42 with no clashing, the VAM-42a N light ST clash with no denticles, and what is now the VAM-42b where the N,ST clash has been polished away and the very heavily polished die and 3 sets of denticle clash marks around DOLLAR. It looks like the die dropped on the seat die during set up, and is what I wrote in my letter to Leroy and he concurred.

As to the question of die progression on the VAM-82, My coin has a light die crack that extends to the upper most star on the viewers right side and has "Y" cracks that extend into the 3 and 4th star points on the viewer right side of the stars. I cant remember seeing and VAM-82 coins in a later die state.
Top

...and Russ is going to send me the 82A for another look and maybe another trip to Sidney
often the crusher of hopes and dreams
Top

Whatever it is, that thing looks awesome lol.

Did retained cuds often affect the surface of the coin like that? I know when they broke off they look funky... But i thought retained cuds show regular surfaces in the cud before it breaks?

Do you have a color full coin photo? Even the surfaces of the legend letters changes where the line is. That is so cool lol...

Edit: Or what about struck through the edge of a thin soft cloth or a sheet of paper or something? Would that might leave a perfectly straight line, not allow flow lines to form, but still allow the details to be transfered from the die to the coin through the cloth/paper?
It's coming...

TheYokel wrote: ↑
Tue Aug 13, 2019 5:27 pm
Edit: Or what about struck through the edge of a thin soft cloth or a sheet of paper or something? Would that might leave a perfectly straight line, not allow flow lines to form, but still allow the details to be transfered from the die to the coin through the cloth/paper?

That was my first thought on seeing that one picture of the 82A - looks more like some odd strike-through than a cud...
Top

TheYokel wrote: ↑
Tue Aug 13, 2019 5:27 pm
Edit: Or what about struck through the edge of a thin soft cloth or a sheet of paper or something? Would that might leave a perfectly straight line, not allow flow lines to form, but still allow the details to be transfered from the die to the coin through the cloth/paper?

That was my first thought on seeing that one picture of the 82A - looks more like some odd strike-through than a cud...

Whatever it is... It perfectly flattened the denticles and didn't "break" or crack into it. 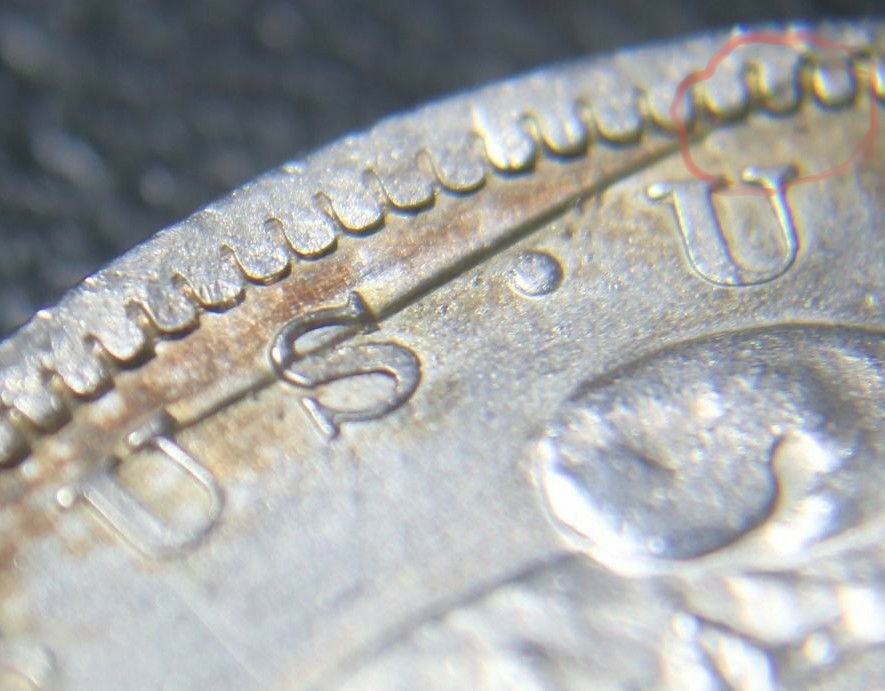 Almost looks like the entire area was elevated... Techtonically.. For lack of a better description.

It has the appearance of a fault line where the rear (by the rim) was raised above the rest of the coin.

Take a really clear photo of the affected area on the reverse and see if it shows a similar depression line or whether only a single side is affected.
It's coming... 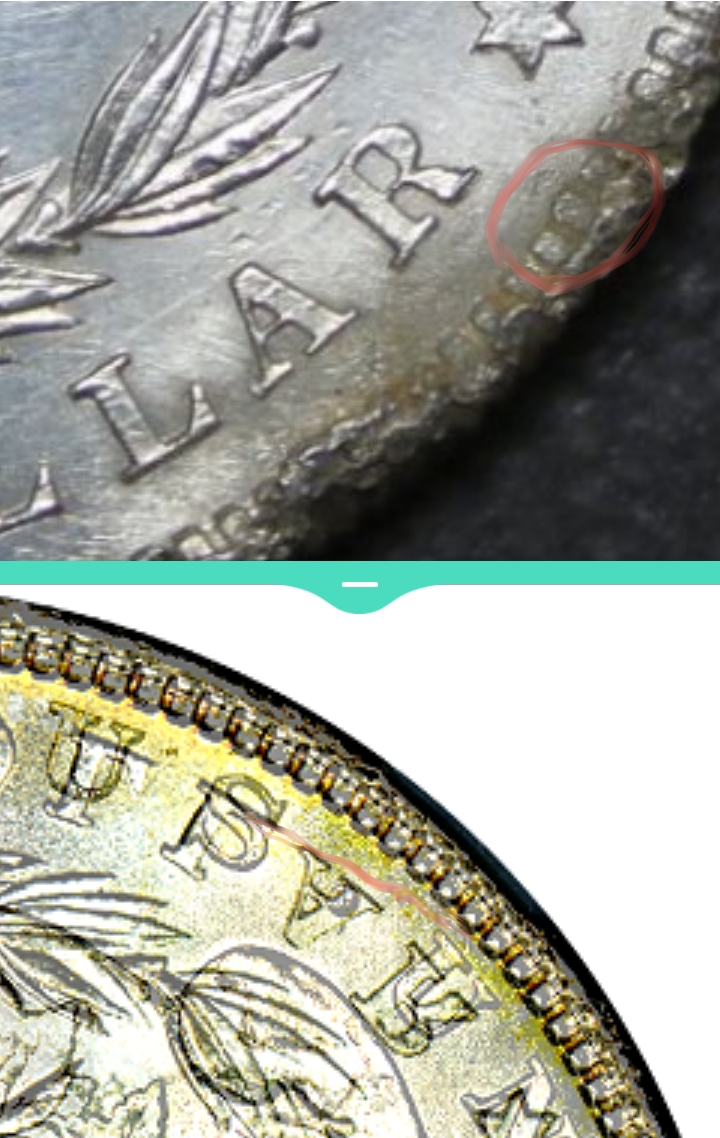 The new pages are setup. Let me know if I need to make any changes. Once again, congrats on your new DC's.