reverse motto has r of trust missing the upper portion

Have you eliminated all the other VAM's with a broken right forth star and broken r in Trust?
Top

Welcome to the addiction. Keep on VAMming!
Refrain from computing the total number of poultry... before the process of incubation has fully materialized.
Top

Thank you ChiefRet for asking me that question. I just checked the other broken r VAMs that I found, they are 74 and 74a.
(If there are others that I missed, let me know.)
VAM 74 claims there is a diagonal die polishing line at the back of the eye socket that is plain to see. This coin does not have that feature. VAM 74a also requires a line behind the eye. Again this coin does not have that either.
I'm using 60X magnification to do my assessments.
I am new to this so please forgive and correct any conclusions I may inadvertently jump to.
Top

Welcome to VAMWorld. There are many 1878-S varieties that have a broken star and a broken 'r' of trust. Fortunately, if you can get close-ups of the coin, we can help you with an attribution. Start with a picture of the eagle's right (viewer's left) "wingpit" -- where the wing meets the leg. In 1878, San Francisco mint workers often. but not always, re-engraved detail here by hand. This detail is one of the first things I look at on a 78-S when attributing a coin. 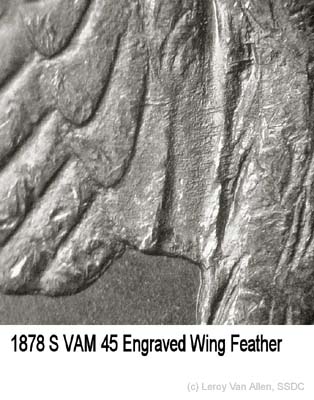 Ah__Yea...78-S is sometimes a challenge. I had to get a copy of Leroy's "1878 S Morgan Dollar Attribution Guide" to start understanding the 78-S. I usually take a look at the broken "r"and 4th, date placement, mint mark position and then the right wing area and that might get me in the ball park.

It looks like a near date to me and the mm looks a little low and slanted left but that may just be my view of the pic, what do you think?
Top

Welcome to the madness. lot's of folks here to help out.

Thanks PacificWR
And Thanks bobbyjenkins. You are correct. the date is a near date and the mm is a little low. I'd say not slanted left so much as a little left offset.
But "What is a VAM 2?" how many other VAMs in this category have broken "r"s?
Is a VAM 2 a coin that is otherwise perfect except for the broken "r"?
This has been ( and continues to be ) quite a learning experience.
I'm very much appreciating all the assistance and clarifications.
I'll not be to quick to think I've found some long lost VAM!
At least not until I get my find qualified by people who have been doing this more then a month!
Thanks again and again!
Top

A little history is in order to explain the listing. Leroy Van Allen first started cataloging these in 1965, producing his own guide to Morgan and Peace varieties, and in 1971 his collaboration with A. George Mallis led to the first publication of the VAM book. Leroy knew about the broken 'r' coin leading up to that research, as the feature had been reported in 1913 by Howard Newcomb (the large cent guy). He cataloged the feature as being VAM 2. The broken 'r' is a hub break, rather than a die break, and every die made from that hub features a broken 'r'. Since 1965, many, and possibly all, other dies with the broken 'r' have been also cataloged. These were differentiated from the original VAM 2 description usually by the engraved wing feathers, but sometimes other features, such as minor doubling or a die gouge. To date, nothing has been cataloged that has just the broken 'r' feature and no other anomaly, which is why VAM 2 is listed as being unlikely to exist.

You're on the right track noticing the broken 'r'. Leroy's 1878-S book, which he says he's updating, has a section of mug shots of the engraved wing feathers divided into two sections -- broken 'r' and unbroken 'r'.
Welcome to the VAMWorld 2.0 discussion boards. R.I.P. old VAMWorld.
Top

yes, messydesk, I'm coming to that understanding.
I'll be more aware of the VAMs that are stand-alone items documented long ago as
not likely to be the correct choice and more likely to be a feature bundled in with other more current variation
discoveries, and included in more comprehensive VAMs.
A learning experience for sure. I hope I haven't frustrated too many VAMers with my naivety .
Top

To the contrary. We quite enjoy a new, enthusiastic collector who is receptive to learning something.
Welcome to the VAMWorld 2.0 discussion boards. R.I.P. old VAMWorld.
Top

Welcome aboard! There are many 78-S wth broken 4th star and the broken r.....
It can be very, very time consuming to try to D them. The 78-S book will definitely help!
Top

It is really refreshing to see a post that has someone relatively new to VAMs that posts something like this and all of the posts from the members seem to be quite positive and not disconcerting to the new user. I love seeing the new interest and welcome you to the group!

i seldom pay attention to the broken star or the broken r. I look at the rengraved wing first and then go from there.
Top
Post Reply
17 posts • Page 1 of 1